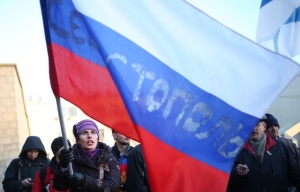 As I expressed in an earlier post, I do not think that the Kremlin is interested in absorbing Crimea.  However, that being said, I would like to point out five reasons why absorbing Crimea would be detrimental to Moscow:

1. It would undermine the terms of the 1997 Russia-Ukraine Friendship Agreement.  In this treaty, Russia recognized the territorial integrity of Ukraine.  In return, it received substantial benefits, including Ukraine giving up its Soviet-era arsenal of nuclear weapons for destruction.  If Russia reneged on this treaty by absorbing Crimea, then it could leave the door open for Ukraine to seek nuclear arms.  Nobody wants nuclear proliferation and it certainly would not be in Russia’s interest.

2. Financially speaking, annexing Crimea comes with a huge price tag.  Putin has already seen the effects of the 2008 global financial crisis on Russia.  It brought thousands of middle class Russians out into in the streets of Moscow and seriously hurt Putin’s approval rating.  Annexing Crimea would bring about a substantial financial reaction that would do more harm to Russia than good.

3. Russia would be isolated from the West.  Annexing Crimea would seriously damage Western-Russian relations which are especially crucial to both sides.  One could argue emotionally that relations with the West are already tense, so why would Russia care?  Indeed, Russia would care because it has strong economic connections to the West, especially the EU.  Likewise, the West (and the EU in particular) has strong economic ties with Russia.  To severe these ties would create serious problems for both Russia and the West that neither side can really afford.

4. It would seriously damage Russia’s credibility in Ukraine.  Opinions about Russia vary in Ukraine.  In Western Ukraine, especially Galicia, there is a strongly anti-Russian sentiment.  However, the attitude becomes more positive in Central Ukraine and especially in the Russophone South and East Ukraine.  Arguably, it is also positive in the distinct westernmost oblast of Zakarpattia where pro-Russian sentiment can be found among many of the Carpatho-Ukrainians.  As I wrote earlier, Putin’s primary aim is not to annex Crimea or to annex Ukraine in part or in whole.  Rather, he wants to see Ukraine in its entirety join as an equal partner in his Eurasian economic Customs Union.  Such a move would be impossible without domestic support and if Crimea is absorbed by Russia it would alienate broad segments of the Ukrainian public, from Uzhgorod to Luhansk, who regard Crimea as “their turf” even if it is an ethnically Russian-dominated region.  Further, by annexing Crimea, Russia would also lose a significant point of geopolitical leverage over Kiev which, if not keeping the country within its orbit, would at least ensure that it does not join the NATO military alliance.

5. It would give license for further NATO expansion, right up to Russia’s frontiers.  By absorbing Crimea, Russia would be giving a clear justification for the expansion of the NATO military alliance deep into post-Soviet territory.  Cold War lobbyists and anti-Russian hawks in the West would feel vindicated and justified in their efforts, dating back to the 1990s, to bring NATO right on Moscow’s doorstep.  These NATO expansionists would play on popular Ukrainian disillusion with Russia in the aftermath of a potential Crimean absorption and would work to bring Kiev into the alliance.  Suddenly, Russia may find itself faced with NATO military bases in Sumy, a mere 98 miles away from Kursk and 404 miles from Moscow!  Further, NATO expansionists would also speed up a potential Georgian membership in NATO in the south (something that is already being discussed).  As it stands now, Moscow still has some cards to play with Tbilisi, as I have discussed in a previous analysis.  However, an absorption of Crimea would potentially threaten any advancements in Russo-Georgian relations and it could also plant Tbilisi firmly in the Western camp, making potential Georgian membership in NATO a real possibility.  This would mean that NATO bases could potentially be on the southern slopes of the Greater Caucasus range with missiles aimed at Chechnya, Daghestan, and Sochi.  This would also give the West a perpetual outlet to Eurasia as Georgia now serves as a corridor to Western access to resource-rich post-Soviet Central Asia and the Caspian basin.  If Russia annexed Crimea and the West reacted by planting Georgia firmly in its camp, then Moscow’s influence in Central Asia would also be undermined.

Given these five reasons alone, I must state again that I think Moscow is not interested in annexing Crimea and instead seeks to use it as a bargaining chip with the West in the ongoing Ukraine crisis.