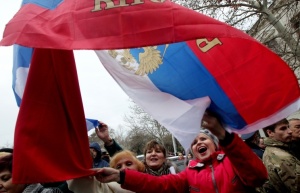 There has been much speculation over where the Ukraine crisis will go next.  Here are my thoughts on this issue.

Moscow will likely not accept the unification of Crimea with Russia.  As Russia scholar and former diplomat Jack Matlock has stressed, this is not in Russia’s interests. Instead, the Kremlin will relent and allow Crimea to remain part of Ukraine. However, Putin will only agree to this on three very significant conditions:

All are very real concerns for Russia.  Many in the present interim government in Kiev have advocated for Ukraine’s NATO membership and for canceling the Black Sea Fleet agreement with Moscow.  One of the government’s coalition members, the far-right Svoboda party, has even advocated abolishing Crimea’s autonomy altogether.  At the same time, Russia is not interested in annexing Crimea, but rather in having Ukraine (in its entirety) as an equal partner in its Eurasian Customs Union and not as a member of the EU and certainly not as a member of NATO.

Given this, the Kiev government, already faced with an impending financial collapse and a potential Russian gas shutdown, will have no choice but to agree. The Europeans, led by Germany and the UK (since France under Hollande is increasingly losing its international standing) will back the agreement. Washington will not have much of a say.

After this, Ukraine will implement harsh austerity measures to help save the national economy with the help of the West and the IMF. The effects of this austerity combined with other factors, such as the presence of the far-right in the government, will lead to rising public discontent and the downfall of the present government.

2 thoughts on “Ukraine: What Will Happen Next?”