Many in the West have already hailed the election as a “clear victory” for Ukraine’s “European majority.” However, such an assessment is questionable. In fact, it was an election that really did not help to bring Ukraine any closer to unity. The voter turnout in the country illustrated this.

Overall, the national turnout for the election was 52.42%. On a regional level this varied. In the Southeastern oblasti, the turnout was low, with the lowest recorded in the Kiev-controlled sections of the Donetsk and Luhansk oblasti.

Lower voter turnouts were also registered in the far-western oblast of Zakarpattia (Carpathian Rus’) as well as in Chernivsti oblast on the Romanian border.  Turnout was low throughout Zakarpattia, home to the Rusyn-speakers and a distinct region in its own right.  However, it was lowest in districts on the border with Hungary, inhabited by ethnic Hungarians.  Likewise, in Chernivsti, the areas with the lowest voter turnout were those with significant populations of ethnic Romanians.

Not surprisingly, electoral patterns were more divided in the Central oblasti, with an average turnout ranging from 50 to 60%. Of these, Kirovograd oblast registered the lowest turnout. Finally, in the Western oblasti, turnout exceeded 60% and in Lviv oblast, it reached 70%.

It is also interesting to observe which parties managed to win which oblasti in the nationwide election results. 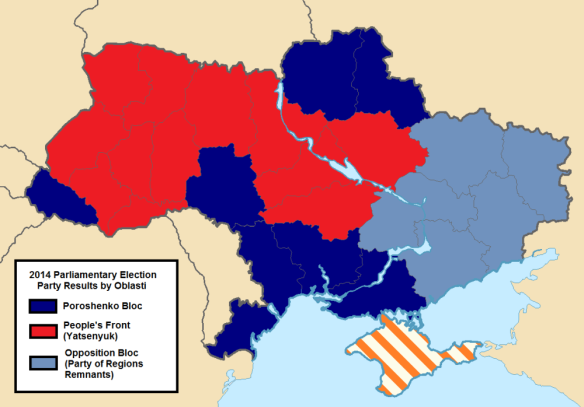 In this regard, Petro Poroshenko managed to carry much of the South and the far-western oblast of Zakarpattia (Carpathian Rus’). His contest with the pro-Western nationalist and current Ukrainian Prime Minister Arseniy Yatsenyuk, was most heated in the Central oblasti. Of those Central Ukrainians who participated in the election (about half of the region’s registered voters), most were primarily divided between Poroshenko and Yatsenyuk. With the conclusion of the election, Poroshenko was able to secure three Central oblasti: Chernihiv, Sumy, and his native Vinnitsya. He lost most of the others by as little as a single percentage point.

In addition to securing most of the Central oblasti, Yatsenyuk and his People’s Front secured their greatest victories in much of the Western oblasti, including all of historic Galicia and Volhynia and Yatsenyuk’s native Chernivsti. Yatsenyuk and his party are known for their more hawkish stance toward Russia, which may explain their appeal to many in the Western part of the country.

In fact, Yatsenyuk’s main pet project has been the construction of a large Berlin Wall-style rampart along the entire Russo-Ukrainian border.  Yatsenyuk is fully committed to this grandiose and costly scheme, even as Ukraine’s economy spins into bankruptcy.  Ironically, in March, it was Yatsenyuk who, in an apparent attempt to channel Ronald Reagan, called for Putin to “tear down this wall.”  In response to news about the proposed plan, former Soviet President Mikhail Gorbachev stated, “I am against all walls,” adding that “let’s hope that those who are planning such a ‘construction’ come to their senses.”

Finally, the Opposition Bloc managed to secure much of Ukraine’s Eastern oblasti. This included Kharkov, Dnepropetrovsk, Zaporozhia, and the Kiev-controlled areas of Donetsk and Luhansk. Other pro-Russian parties also fared well in the East, including the Communist Party which placed second in Luhansk. The conclusion one may derive from the latter is that, even without the presence of the Donbas rebels, the locals are still largely pro-Russian.

By contrast, most of the remaining newly-elected parties in parliament are primarily pro-Western and nationalist in character. Though some commentators have been quick to label some of them as “fascist” or “neo-Nazi,” the fact is that their stated ideologies, while fiercely nationalist and hawkishly anti-Russian, are not explicitly fascist.

Ukraine’s far-right Svoboda Party marches in Kiev. The party did not receive enough votes to retain its position in parliament. (Gleb Garanich / Reuters)

Additionally, Ukraine’s two overtly neo-Nazi and fascist parties, Svoboda and Right Sector, garnered only 5% and 2% respectively and thus will not be among the major parties in parliament. This is despite the fact that these two parties played a significant role in the success of the Maidan Revolution.

At the same time, it is important to note that there are some political figures with fascist proclivities and UNA (Ukrainian National Assembly) connections among the “mainstream” nationalist parties. One of them is Andriy Parubiy of Yatsenyuk’s People’s Front. It was Parubiy, together with Oleh Tyahnybok, who founded the original Svoboda (then known as the Social-National Party of Ukraine) in 1991.

Further, the major parties will only occupy half of Ukraine’s parliament. The rest will be representatives from single-mandate districts and these include far-right activists, not just from Svoboda and Right Sector, but from the feared Azov Battalion as well.  In fact, Right Sector’s leader, Dmytro Yarosh, even won a single-seat constituency in Dnepropetrovsk.  Additionally, Right Sector, Patriots of Ukraine, and other far-right groups still have influence on the streets and certainly in Kiev’s volunteer battalions that have fought in the “anti-terrorist operation” in the Donbas. 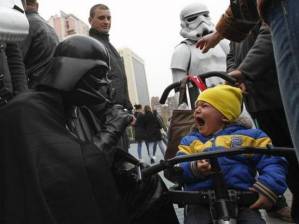 Meanwhile, one of Ukraine’s more interesting candidates, the elusive Darth Alekseyevich Vader, also sought political office. A candidate of the Internet Party of Ukraine, Mr. Vader pledged to turn Ukraine into a “galactic empire.” However, the Sith Lord was denied registration for his candidacy after refusing to remove his mask.

Another loser of sorts was Yulia Tymoshenko. The “gas princess” and self-styled Marianne of the Orange Revolution, Tymoshenko’s arrest sparked a cause célèbre in Europe against the Yanukovych regime. How ironic it must seem to otherwise uniformed outsiders that Tymoshenko was barely able to make it into parliament and had to compete against Svoboda (of all parties) to assume that place. However, to Ukrainians who are familiar with Tymoshenko’s role in plundering the country since its independence, such a result was to be expected.

Ukraine’s Oleg Lyashko in the Rada

In a twist of fate, Tymoshenko actually placed lower than the formerly marginal Oleg Lyashko, leader of Ukraine’s Radical Party. A flamboyant populist known for instigating brawls in Ukraine’s parliamentary circus, Lyashko has used the Maidan revolution, the Donbas war, and Ukrainian nationalism to advance his political career. His Radical Party is a typical post-Soviet personality-based party, serving as a mere vehicle for his political aims.

The eccentric and controversial politician has advocated for a buildup of nuclear arms in Ukraine and has a laundry list of promises, albeit few explanations on how to deliver on them. He has also become an active participant in the Donbas War, where his actions and abuses have been criticized by the human rights organization Amnesty International among others. 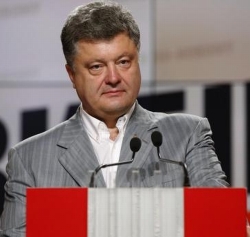 Lyashko’s party, like Yatsenyuk’s and others in Ukraine’s newly elected parliament, also advocates a continuation of the Donbas war. The fact that these “war parties” have been emboldened by their recent election victory will present a serious challenge to President Poroshenko, who will have to forge a coalition with them.  The “chocolate king,” as Poroshenko is often known, is in a tough spot, caught between his domestic hawks and pressure from the European Union (especially Germany) and Russia to maintain the ceasefire and find a diplomatic solution to the Donbas conflict.  He is in an unenviable position.

In addition, Ukraine is bankrupt and its economy is in total disarray. The newly-elected parliament will soon discover that being pro-Western, nationalist, and anti-Russian is simply not the answer for Ukraine’s mammoth economic problems.