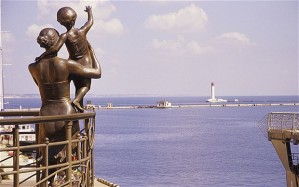 Bronze statue of a mother and child in Odessa (Rex Features)

1. Most of them are not ethnic Russians. In fact, unlike in Crimea, the vast majority are ethnic Ukrainians who speak Russian. Census data from the Tsarist, Soviet, and post-Soviet eras uniformly confirm this for all of the Russian-speaking oblasti in present-day Ukraine. At the same time, there is also a substantial ethnic Russian minority in the southeast. There are many mixed marriages between Russians and Ukrainians and a large number of southeasteners have family in Russia.

2. Their native region does not correspond entirely to historic Novorossiya. The southeast also encompasses other historical regions of Ukraine, notably Sloboda Ukraine (around Kharkiv), the Donbas (the Donetsk basin), and Zaporozhia (centered on Dnepropetrovsk). The latter was an old Cossack territory and is largely considered to be the “Piedmont of Ukraine,” the place where the movement to unify the Ukrainian people began. Yet regardless of whatever historical regions existed in the southeast, one thing is clear: the vast majority of the people historically self-identified as either “Malorussians” or “Ukrainians” in Tsarist, Soviet, and post-Soviet censuses. This is an indisputable fact.

3. They tend to be more cosmopolitan and, indeed, “Soviet” people. It is the quality of multiculturalism that really dominates in this part of Ukraine. Ukraine’s largest cities are located here and this has attracted many people from other Soviet (and later ex-Soviet) republics to move to this area. Ukrainian nationalism has much less traction in this part of the country and, even more broadly, antisemitism and discrimination in general are less of an issue in the southeast than in other parts of Ukraine. Jews are well-integrated and there have been many Jewish mayors and governors. Mixed marriages between different ethnic groups is also a frequent phenomenon. Odessa is perhaps the best example of a multicultural city in the Southeast. 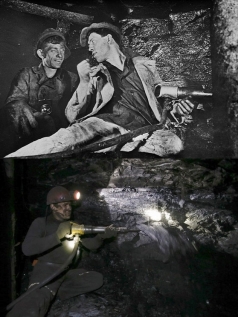 Two images of the Donbas. The top shows Aleksei Stakhanov with a fellow miner in 1935 (Library of Congress). The bottom shows a Donbas miner in 2014 (Reuters / Maxim Zmeyev).

4. Many of them, especially in the Donbas, are working-class people. The Donbas is synonymous with industry in Ukraine. It was a significant region in the “Rustbelt” of the former USSR, comparable to the Ruhr valley in Germany.  The area remains very economically important for Ukraine today. There are several large cities in this part of the country with large working-class populations. It is a heartland for coal mining and, as an example of just how “working-class” it is, one of its famous native sons is the great miner and Hero of Socialist Labor Aleksei Stakhanov. The Stakhanovite movement had a major following in the Donbas.

5. Most of them support neither Euromaidan nor the post-Maidan government of Ukraine. Despite hopeful predictions that Euromaidan would “unite Ukraine,” the opposite has in fact occurred. There were even more supporters of the 2004 Orange Revolution in the southeast than there were of Euromaidan. Further, most favor membership in the Moscow-backed Eurasian Union as opposed to the European Union and perceive the post-Maidan government as assuming power through illegal means or even through a “coup.” Few participated in the recent Ukrainian Presidential election which Petro Poroshenko won. Most blame the United States and the Obama administration specifically for Ukraine’s most recent misfortunes.

6. Most of them disliked the corrupt regime of Viktor Yanukovych. Despite the fact that Yanukovych registered consistent victories in the Russian-speaking oblasti of the southeast, most nonetheless disliked his corrupt and incompetent government.  Few, however, viewed the Euromaidan revolution as the solution to the problem.

7. Most of them do not support the Donbas rebels. The rebels’ Russian nationalist ideology and advocacy of a “separate” identity for Ukraine’s Russian-speakers has led the majority of the people in the southeast to view them with distrust. The one aspect of the rebels that they do support is their general opposition to Kiev. Generally, though, the ideology of the rebels has failed to catch-on beyond the Donbas. This is most certainly not due to any success on the part of Kiev’s “anti-terrorist operation,” but rather by the rebels’ own narrow and short-sighted nationalist dogma. 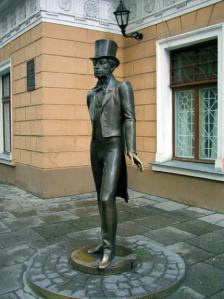 The rebels’ nationalism is particularly unappealing in a progressive multicultural city like Odessa on the Black Sea coast. With its mix of Russian, Ukrainian, Jewish, and Mediterranean influences, Odessa is an irreverent city celebrated for its “love of the dandy in men and the daring in women.” It was “the St. Petersburg of the south,” founded on the order Catherine the Great and her lover Prince Potemkin with the vision of the Spanish General José de Ribas, after whom that the city’s famous Deribasovskaya Street is named. It was Odessa that was the scene of Pushkin’s torrid love affair with the wife of Prince Mikhail Vorontsov, producing some of the most beautiful Russian-language poetry. It is also a city that brought the world Yiddish theatre, Babel, and Ilf and Petrov. Comedy and humor are more than a staple of Odessa: they are a way of life. It is this inherent cultural liberalism that explains why the rebels will never stand a chance here ideologically. But then again, neither will Kiev. 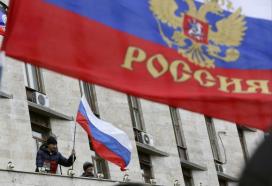 8. Many of them view Russia favorably. Putin, Russia, and the Eurasian Union are all still very popular here due to a mix of factors, including linguistic, familial, and economic connections to Russia. On Crimea, it should be noted that though few initially supported Russia’s move to incorporate the peninsula, this now appears to be changing, especially since the 2 May Odessa massacre and Kiev’s “anti-terrorist operation.” It should likewise be noted that support for Russia does not necessarily mean support for the rebels whom most southeastern Ukrainians view with distrust.  The Soviet Union is also still greatly missed here and most southeastern Ukrainians are leftists when it comes to economics partially due to this sense of nostalgia.

9. Most of them strongly oppose the “anti-terrorist operation.” Kiev’s bombardment of towns and cities, human right abuses, atrocities, the massive death toll of civilians, and the involvement of right-wing groups like Right Sector (Praviy Sektor) have alienated most southeastern Ukrainians against Kiev.

10. Most of them want more rights. These primarily include bilingualism and the right to elect their own governors. Some advocate for a simple de-centralization in a reformed unitary state while others favor federalism, and more extreme factions (a very small minority among them) support a confederation. Most importantly, it must be emphasized that the vast majority of southeastern Ukrainians do not want to secede from Ukraine.

2 thoughts on “10 Points on the People of Southeastern Ukraine”