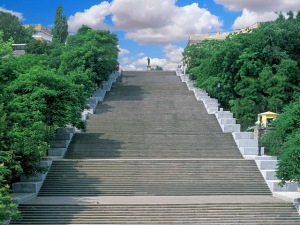 Odessa is a beautiful, theatrical city, renown for its humor, wit, culture, and charm. Yet, at the same time, it is also a city that has experienced much pain and tragedy in its history. Since the horrors of World War II, who would have guessed that nearly 70 years later, the people of this celebrated “St. Petersburg of the south” would again have cause to mourn?

It is beyond doubt that the 2 May massacre in Odessa was a turning point for the crisis in Ukraine. Last Friday was a painful day of mourning for a country that is already on the brink of catastrophe. One might expect that such grief would lead toward greater unity within the country and perhaps pave the way for a rational, constructive dialogue toward peace.

Instead, the massacre has only hardened opinions in Ukraine. Throughout the southeast, including Odessa, popular anger and opposition to the Turchynov-Yatsenyuk government is currently on the rise. In Central Ukraine and Kiev, public opinion over the tragedy is divided. In Western Ukraine, while many have expressed sorrow for the deaths, the popular stance largely does not want to fully explore what happened in Odessa.  The involvement of the pro-Kiev activists is downplayed and “pro-Russian provocateurs” are blamed instead.  According to one observer in Western Ukraine, the reaction from some in the West on social media has been “less than compassionate” and “even hubristic.”  Further west, in the remote Rusyn-speaking oblast of Zakarpattia, popular reaction to the tragedy in Odessa is unclear.  Meanwhile, as tensions rise, Odessa’s historic Jewish community, which had been experiencing a cultural and religious revival in recent years (including a Yiddish language revival), is planning to evacuate the city en masse.

In the United States, mainstream media networks like ABC, CNN, and Fox have practically ignored the massacre. In the rare case that it is mentioned, the question of responsibility is always vague. Official Washington offered its condolences on Saturday in the same manner, without naming any perpetrators. Later, though the US Ambassador in Kiev Geoffrey Pyatt admitted in an interview with CNN that there was no evidence of a Russian role in the massacre.

Germany’s Frank-Walter Steinmeier has called for fresh talks to de-escalate the crisis.  (Frank-walter-steinmeier.de)

In Germany, opposition to the events in Ukraine as well as a desire for a resolution to the crisis are growing. One member of the ruling Christian Democrats stated that Germany “should stop being a servant of the Americans” and that confrontation with Russia over Ukraine was “blind to history and deaf to the other side.” Meanwhile, Germany’s Social Democrat Foreign Minister Frank-Walter Steinmeier called for a new round of Geneva talks.  A veteran diplomat, Steinmeier has stated that the new talks will “send a ‘strong political signal’ that previous agreements will be implemented.” The plan now has the backing of Chancellor Angela Merkel.

Russia’s response to Odessa has been remarkably reserved. Moscow condemned the massacre in very strong terms and the State Duma has demanded a probe into the tragedy. However, Russia has refrained from intervening directly in Ukraine, despite anger in Moscow and pressure by hardliners in the Kremlin to invade.

It is undeniably apparent that Right Sector and far-right football fans known as the “Ultras” were singularly responsible for what happened in Odessa. On YouTube, footage has emerged showing the nationalists starting the fire and later shooting anti-Kiev activists who attempted to leave the burning building.

The Turchynov-Yatsenyuk government has sought to downplay the massacre, instead expressing very general “sorrow” for the victims and emphasizing the clashes that preceded it between supporters and opponents of the government. In every case, they are quick to blame the initial clashes on “pro-Russian provocateurs.” During his visit to Odessa, Prime Minister Yatsenyuk reiterated the same script, though also blaming the security services for not stopping the violence.

Yatsenyuk also pledged a de-centralization of powers to the oblasti and to this end, a bill for a nationwide plebiscite on the issue has been registered at the Ukrainian Rada. Yet people living in Ukraine’s southeast are skeptical. The government has announced vaguely-worded “de-centralizations” in the past, but these were ultimately never realized. In a much less calculated move, the government has also dispatched a special all-volunteer battalion of Kiev’s National Guard to Odessa. It is doubtful that such a move will help de-escalate tensions and build confidence in this part of Ukraine. Opposition to the government runs high in Odessa.  Some have even gone so far as to refer to the massacre as an act of “genocide.” Meanwhile, the “anti-terrorist operation” continues in Eastern Ukraine, which is now effectively in a state of war with Kiev.

Overall, anxiety and apprehension remain high throughout Ukraine in the aftermath of the Odessa massacre. If social media is any indication, it demonstrates that people throughout the country have fundamentally different views and interpretations of the event. Dialogue is extremely important to restoring order and peace, but it is increasingly being supplemented by a discourse of “my interpretation is better than yours” and even worse “us vs. them.” In the backdrop of all this is a fast deteriorating socioeconomic situation and the near-bankruptcy of the country. Ukrainians together need to emerge with white flag in hand to set aside their differences and engage in a serious, meaningful dialogue to find solutions to their problems. War, no matter what, should never be an option.

1 thought on “Odessa: A Ukrainian Tragedy”