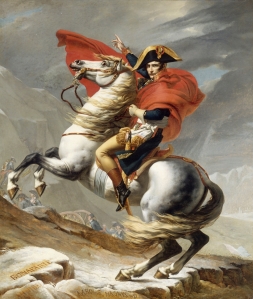 Bonaparte Crossing the Grand Saint-Bernard Pass by Jacques-Louis David, 1800. The historical memories of the West’s invasions of Russia (including the Napoleonic invasion of 1812) still loom large in the Russian consciousness.

Throughout the ongoing Ukraine crisis, few Western commentators and/or observers have considered Moscow’s view of the situation. In the Western media, the prevailing image is that Russia is an aggressor, intent on dominating its neighbors. Western influence is presented as “positive.” Russian influence as “negative.” Joining the EU is depicted as being a road to economic and social prosperity and NATO is offered as a defensive bulwark against the “terrible” Kremlin. Remarkably, at least in the United States, liberals and conservatives are singing the same song. Further, the discourse of “invasion,” “occupation,” “aggression,” and “World War III” is hardly diplomatic. How does anyone believe that negotiations can ensue when such language is thrown about?

By contrast, in Moscow, the view of the situation in Ukraine is entirely different. It perceives the West as encroaching on countries to which it has been very closely associated. Ukraine (the entire country, East, South, Central, and even West), along with Belarus, is viewed as a fraternal East Slavic nation to which Russia is intimately bound. The capital Kiev is regarded by all Russians as the “mother Russian city,” the common point of origin for all East Slavs. To view Kiev within the boundaries of the EU and NATO is more than just a violation of a sphere of influence.  To the Russians, it is almost sacrilege.

Meanwhile, it does not help that some of the most vocal advocates for Ukrainian membership in the EU and NATO come from countries that Russia perceives as historical invaders. They include Poland and Sweden, the co-founders of the Eastern Partnership program that sponsored the Ukraine-EU Association Agreement. Both countries have a history of animosity toward Russia, but it is Poland in particular that Moscow views as being one of the chief advocates for Western expansionism. 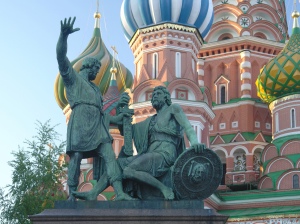 We in the West regard Poland primarily as the victim of Russian aggression, particularly communism. We reflect on Russia’s participation in Poland’s partitions, its suppression of Polish uprisings, the Polish-Soviet War, the Molotov-Ribbentrop Pact, the Katyń massacre, and the establishment of communist Poland. Conversely, to a Russian with a sense of history, Poland is perceived as a historical invader, a country that during the Time of Troubles in Russia (1598-1613) supported the Tsar-pretender “False Dmitriy,” attempted to bring Catholicism to Orthodox Russia, and eventually invaded and occupied Moscow in 1609. That invasion was repelled in 1612 by the duo of Kuzma Minin and Dmitriy Pozharsky, whose statue stands today in front of St. Basil’s in Moscow.

Even in more recent times, Russians recall that it was Poland’s Marshal Piłsudski who, during the Polish-Soviet War of 1919-21, not only tried to ensure the freedom of Poland, but also sought to annex to Poland large swathes of Lithuania, Belarus, Ukraine, and Western Russia to restore the Polish-Lithuanian Commonwealth of old. Piłsudski is still admired by some in Poland today, including members of the political elite such as the late Polish President Lech Kaczyński and his twin brother, Jarosław. He is also greatly admired by former Georgian President Mikheil Saakashvili.

Russian author Leo Tolstoy in a portrait by Ilya Repin, 1887.

Russians likewise recall Polish participation in the Napoleonic invasion of Russia. In Leo Tolstoy’s War and Peace, it is the Polish legion that is depicted as being the most fanatically supportive of an expansion toward Russia, so much so that they drown in the River Viliya for Napoleon. Today, the Russians see very much the same thing, except that Napoleon is now replaced by NATO and that the Poles are now showing their loyalty, not by drowning in the Viliya, but by asking for NATO troops to be stationed in their country.

In another Tolstoyan parallel, Moscow also likely views the Ukrainians who protested on the Maidan as being the modern equivalents of the muzhiks of War and Peace. It was the muzhiks who rose up against their oppressive landlords for Napoleon, who they viewed as the embodiment of the French revolutionary ideals of liberté, égalité, et fraternité. Today though, the modern landlords are Ukraine’s corrupt political elite and oligarchs, while the liberal ideals of Napoleon and revolutionary France are today the liberal ideals of Brussels and the European Union. Moscow regards the latter ideals in 2014 just as they regarded Naopleon’s ideals in 1812 – that is, as false promises motivated only by geopolitical ambitions rather than by any genuine sense of altruism.

Given this, it would be wise to recall history before permitting the rhetoric to get too out of control.

2 thoughts on “How Moscow Views the Ukraine Crisis”