Below are ten basic provisions that I believe may ameliorate not only the Ukraine crisis but also the broader tension that currently exists between Russia and the West. Not all readers will agree entirely with these positions, but hopefully they will become a starting point from which to defuse the situation, proceed forward, and create mutually friendly, not hostile, relations among all parties: 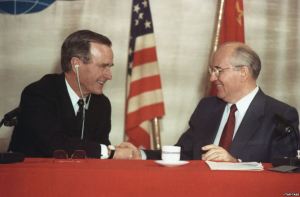 George H.W. Bush and Mikhail Gorbachev in Malta in December 1989 (ITAR-TASS). The Bush administration informally promised Gorbachev that NATO would not expand “one inch” beyond East Germany. The promise was never fulfilled. To defuse the Ukraine crisis, a formal, written promise not to expand NATO by Washington to Moscow would do much to build mutual trust and confidence between both countries.

1. The West and Russia should drop any mutual sanctions or restrictions against one another.

2. In order to encourage mutual trust, Moscow and Washington should make an unambiguous, official agreement prohibiting further expansion and encroachment of NATO into the former Soviet republics. Such an agreement must be clearly articulated in a written document, unlike the informal promise not to expand NATO made by US officials to former Soviet President Gorbachev in the 1990s.

3. The United States must promise to cancel the planned missile defense shield in Poland and the Czech Republic.

5. On Crimea, Washington, Brussels, and Kiev should recognize and accept Russia’s incorporation of the peninsula. This may be a difficult step to take, but the West and the Yatsenyuk government have to acknowledge that the area is demographically and historically Russian, and that it is home to Russia’s Black Sea Fleet. Moscow will not reverse this action and any attempts to force Russia to do so would be counterproductive. Therefore, Washington, Brussels, and Kiev should recognize the reality that Crimea is effectively part of Russia.

6. On Ukraine, both Moscow and Washington should express a desire to see Ukraine proper united and indivisible, and to adopt either an oblast-by-oblast federal system or a decentralized unitary system. Ukraine should declare military neutrality and should pursue integration into the Eurasian Customs Union based on Ukraine’s logical and historic economic ties with Russia; notwithstanding the fact that the EU economy currently cannot manage Ukraine. If Brussels were to bring in Ukraine, it would seriously threaten the stability and unity of the EU and would unravel the progress made over the decades of forging a united Europe. Both Russia and the EU should cooperate on helping Ukraine to strengthen its economy and state institutions by challenging the stranglehold of the Ukrainian oligarchs.

7. Given the fact that many Moldovan citizens are already EU citizens via Romanian passports, and that Moldova is becoming increasingly integrated with the EU, Moscow should recognize Moldova’s pro-European orientation.  In turn, Chișinău should relinquish its claims to Transnistria.  Depending on the situation in Ukraine and the will of the people of Transnistria, the latter could then reunite with the former as part of the multiethnic, Russophone Odessa Oblast. The new division would occur along the River Dniester, with all Moldovan-controlled areas on the right bank of the river being ceded to Transnistria, and all Transnistrian-controlled areas on the left bank being ceded to Moldova. The remaining Moldovan state would proceed with EU integration, but would declare military neutrality and disavow any intention of reunification with Romania.  Its relationship with the latter would then become akin to the relationship shared between Germany and Austria.  Such a resolution would alleviate ethnic concerns within Moldova, particularly with the Gagauz.

8. On Georgia, Moscow should promote (with the support of Washington) a federal solution for Georgia as well, making Abkhazia and South Ossetia federal states within a unified Georgian republic. The process for this should follow roughly along the lines of the proposed plan that I posted earlier. Like Ukraine, this new united Georgian federal state should declare military neutrality and, for economic, historical, and geographic reasons, should integrate into the Eurasian Customs Union.

9. On Armenia and Karabakh, the solution to this particular issue should be in the principle of self-determination for the Karabakh Armenians, though this is just an opinion. The aggressive and threatening rhetoric and actions from official Baku have only alienated the Karabakh people. Notably, Baku has also consistently denied basic human rights to its own ethnic Azerbaijani citizens. Thus, such a regime could not be trusted to rule over the people of this region. Aside from this, in order for there to be a realistic and lasting solution to this problem, Azerbaijan must open its borders with Armenia and civil society contacts must be enhanced. Armenians and Azerbaijanis can get along, but not when they do not see or communicate with one another. In their common humanity, they will find that peace and coexistence are possible, but the borders must be open first. Turkey too must open its border with Armenia.

10. Both sides should agree on a gradual convergence of the West and Russia (along with the former Soviet states) in economic, political, and military spheres, thus ensuring that all parties are on the same page with regard to the future of the post-Soviet space and post-Cold War world in general. There are so many more important priorities that need to be solved in the world (Iran, North Korea, Syria, etc.). Russia and the West need to cooperate on these issues and must not be in conflict. Further, such a solution would effectively help to realize the long-term goal of a united and indivisible Europe. It would also go a long way toward building trust with Moscow, thus creating the conditions for Russia to deepen its democratic development endogenously.

1 thought on “How to Defuse the Ukraine Crisis”