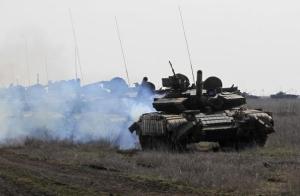 Today Ukraine has signed its Association Agreement with the European Union. It was emphasized that only the political portions of the document were signed and not the ones dealing with economic a trade issues, i.e., Titles IV, V, and VI as well as the three annexes and the three protocols of the deal.

This leaves the remaining portion of the agreement, which includes the controversial provision on “security convergence” that some commentators have interpreted as “NATO expansion through the backdoor.”

To quote the text in full:

The Parties shall intensify their dialogue and cooperation and promote gradual convergence in the area of foreign and security policy, including the Common Security and Defence Policy (CSDP), and shall address in particular issues of conflict prevention and crisis management, regional stability, disarmament, non-proliferation, arms control and arms export control as well as enhanced mutually-beneficial dialogue in the field of space. Cooperation will be based on common values and mutual interests, and shall aim at increasing policy convergence and effectiveness, and promoting joint policy planning. To this end, the Parties shall make use of bilateral, international and regional fora.

As you can see, NATO is not mentioned here, but the CSDP is.

What is the CSDP?

It is the Common Security and Defence Policy of the European Union. It was founded in 1999; France and Germany were its biggest proponents. The idea at the time was to develop a pan-European security alliance, independent of NATO.

However the US, under the Clinton administration, objected very strongly to this. They did not want to see NATO decline in its relevance. The 2002 Berlin Plus agreement was able to iron out points of disagreement between the EU and NATO and it led to closer cooperation between the two.

To this day, the CSDP technically remains its own independent institution, subordinate to Brussels. It includes countries like Finland, which is an EU member, and does not include non-EU members of NATO like the United States, Canada, and Turkey. At the same time, the cooperation between the CSDP and NATO is very close, so close in fact that NATO structures are even utilized by the CSDP. This complex relationship has been described as “separable, but not separate.”

Regardless of whether or not this provision indicates a direct pathway for future Ukrainian membership in NATO, it is still likely to raise serious concerns in Moscow.  From the Russian perspective, the possibility of a potential Ukrainian membership in any Western military structure excluding Russia, whether it is the CSDP or NATO, will likely be viewed with great suspicion, apprehension, and unease.