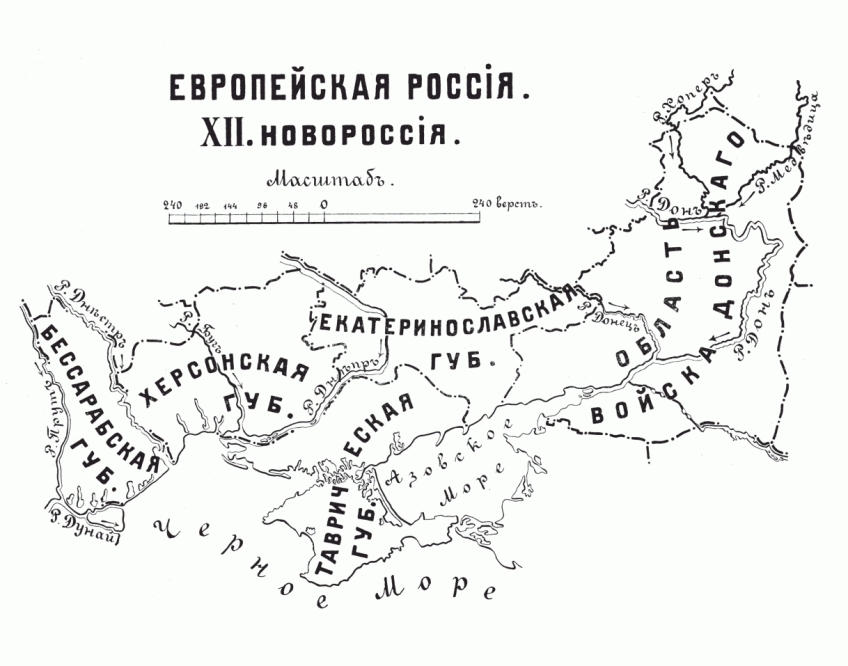 Map of Novorossiya, 1913. Note that it includes the territory of the Nikolayev and Kherson oblasti, the southern portions of Transnistria and the Odessa oblast (excluding the Budzhak), the southern part of the Zaporozhia oblast, the southeasternmost area of the Kharkiv oblast, the Western half of the Donbas, and most of the historical region of Zaporozhia (the Dnipropetrovsk and Kirovograd oblasti with the northern portions of the Zaporozhia oblast). This particular map of Novorossiya also includes territories that comprised the Greater Novorossiya region, specifically Bessarabia (Moldova proper with the Budzhak region of the Odessa oblast), Crimea, and the Tsarist-era Don Host Oblast (which included the eastern half of the Donbas and significant portions of Southern Russia). Note that the historical region of Sloboda Ukraine (most of the modern-day Kharkiv oblast plus the northern parts of the Donetsk and Luhansk oblasti and the southern portions of the Sumy oblast) is not included within the scope of Novorossiya.